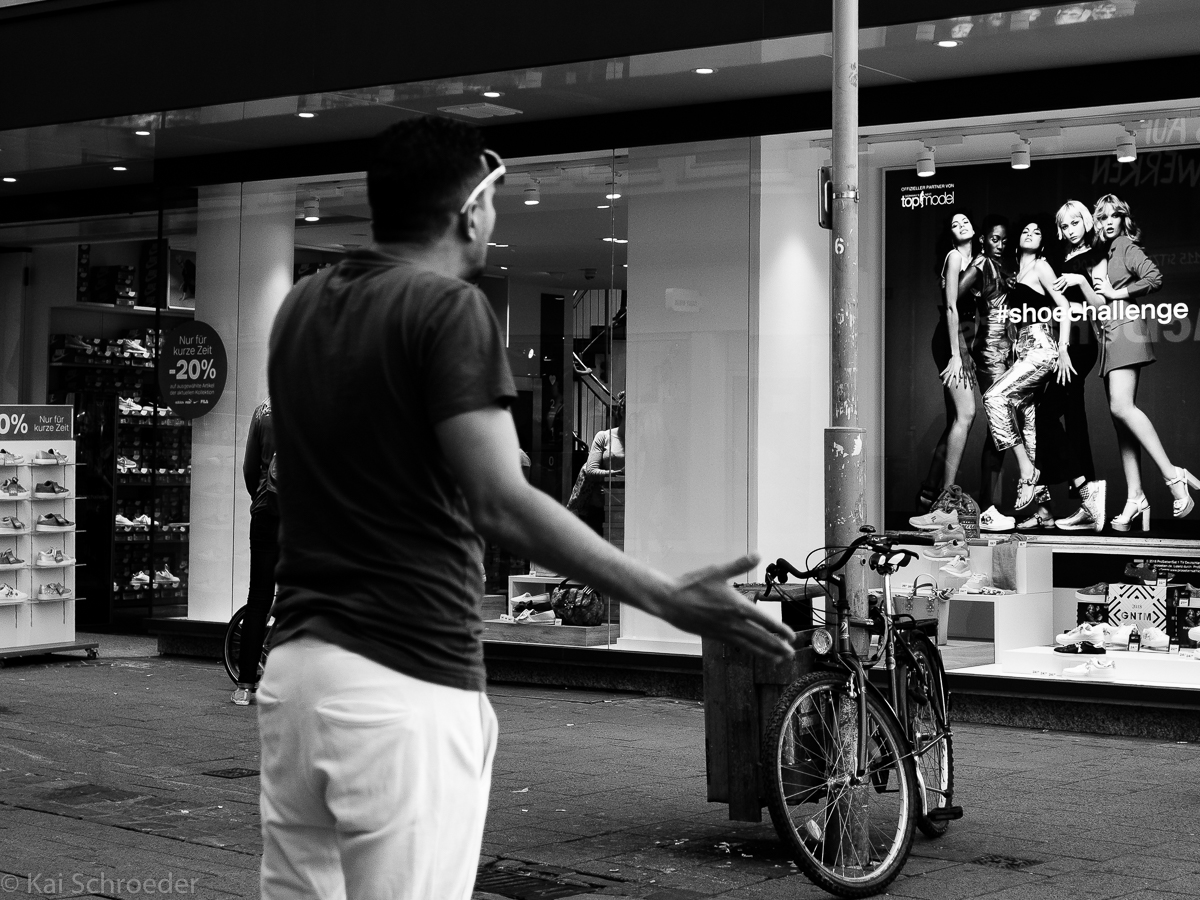 How do I get good street photos?

No! I don’t want to be a big mouth, but to give newbies some tips, what helped me out, so I was able to take some usable photos in a relativly short time. It’s up to you to decice, if you will find my tips useful or useless for you.

In general I will distinguish between three categories, because all all three needs a separate handling:

That topic isn’t worth to go deeper here, because I will refer to the master of street portraits: Eric Kim. At https://erickimphotography.com/ you will find a lots of tips and advices to street portraits. There is nothing more to say.

But one point is essential in my opinion: Get as close as you can!

First it is important to know, how humor works. A good book at this topic is John Vorhaus, The Comic Toolbox How to Be Funny Even If You’re Not: How to Be Funny If You’re Not, Silman James Press, 1994. Because of Vorhaus humor is a result of unexpected contrasts or contradictions. I will talk about visual contrast later on, but at this point the contrast of motifs is the topic. That means the contrast of impossibility or exclusion. 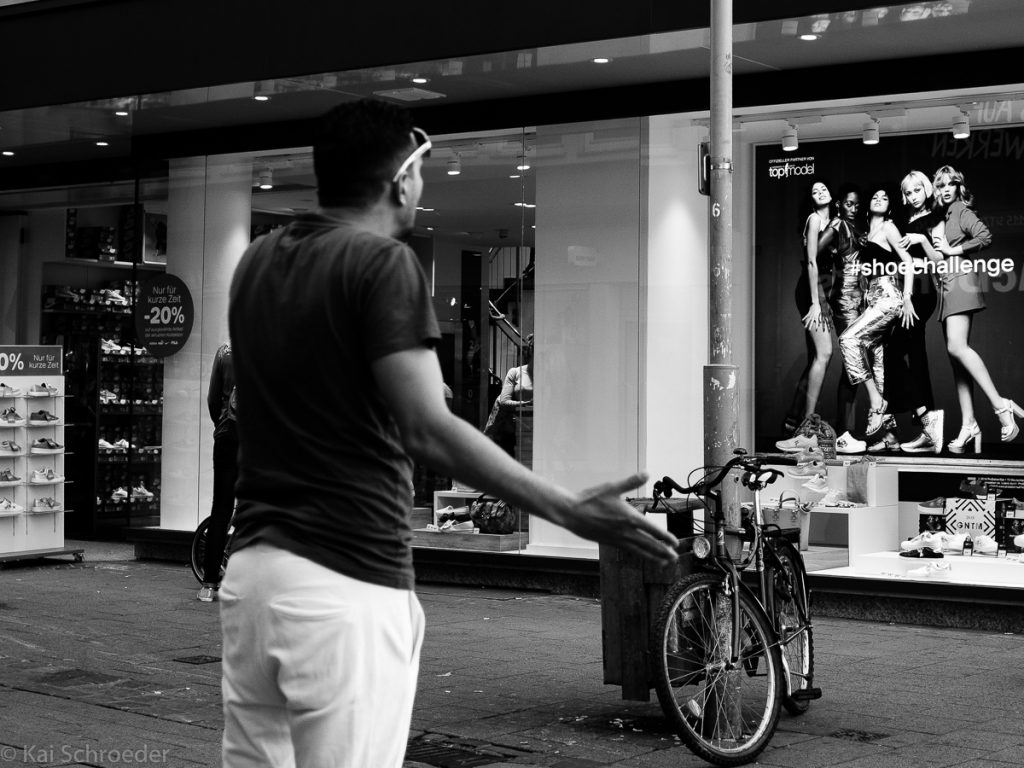 This picture is a little bit funny, because it looks like the man is talking to the models on the poster. We all know, that this is impossible, so our brain tries to complete the missing point. The result is astonishment, thinking and if we guess the solution also a smile.

TIP: Seek out for posters, in which the shown people look directly at you or a little bit aside you. Then position yourself in this angle of view and wait as long as a person walks by. Then take a much photos as you can get, because there will normally be one, which looks good.

TIP: In all cases of dynamic situations: Look at your environment with open eyes: What is the dominating situation? If you got this dominating point, then seek out for the contradiction or an exception!

Visual contrast can be caused by Light-Dark (Chiaro-Scuro) or by color contrast. 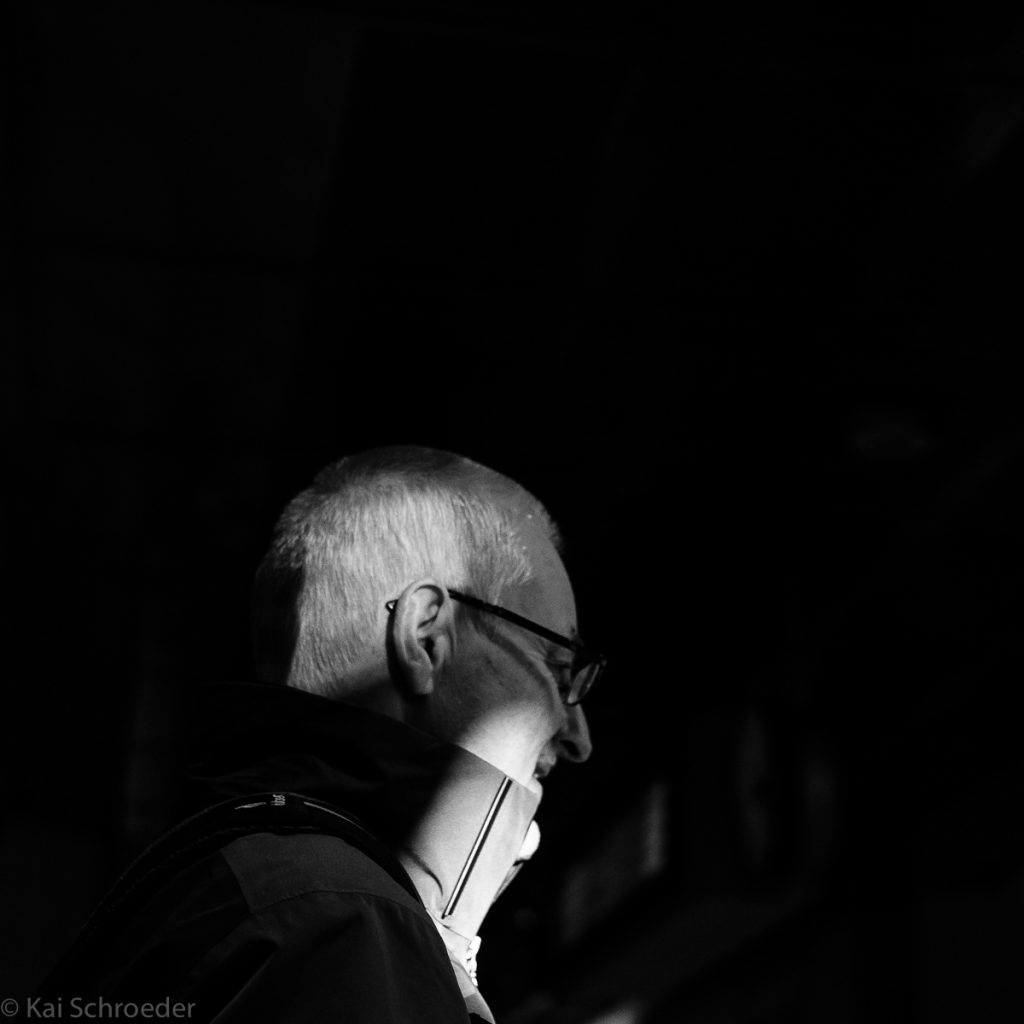 Color contrast is caused by contradictional colors according to the color circle and harmony (see also Itten, Goethe etc.). 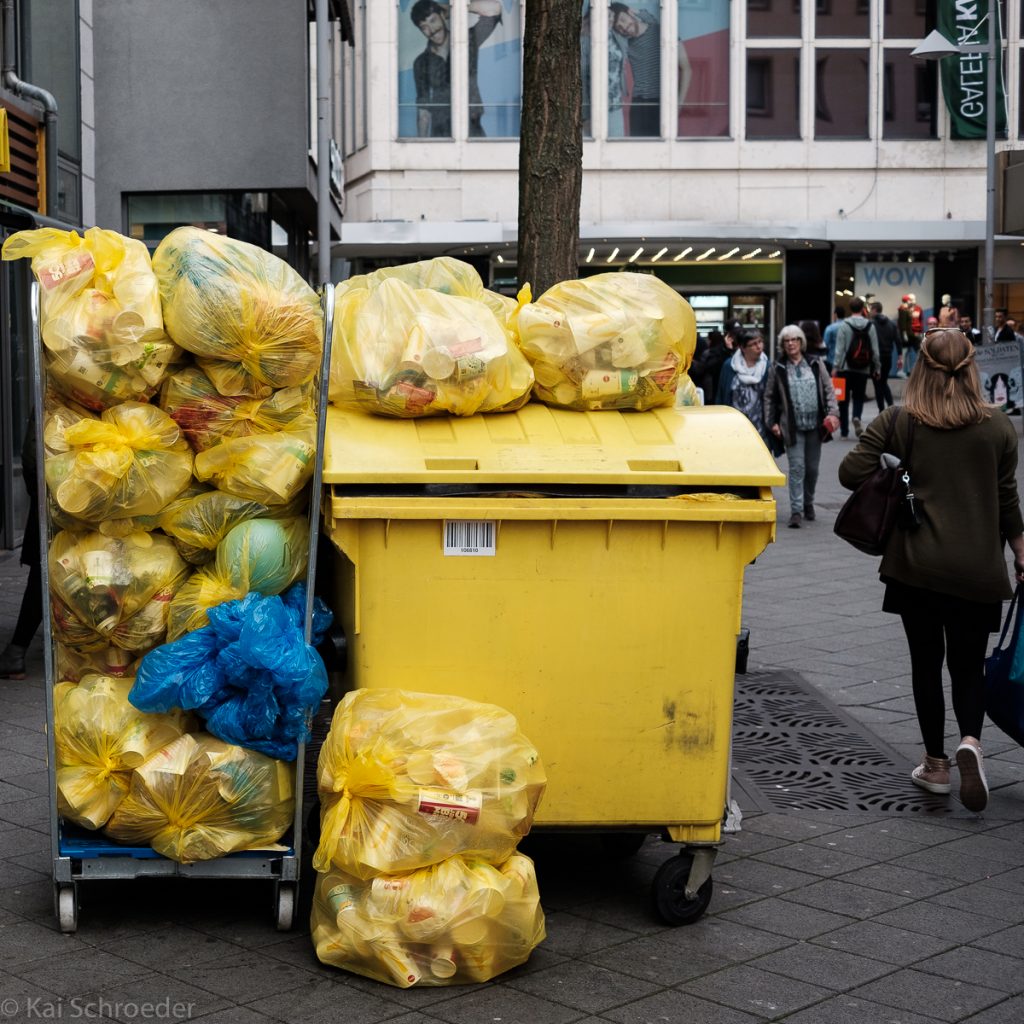 TIP: Color contrasts are sometimes not easy to see. But normally your eye will look at light colors like yellow, orange or red. If you recognize some of these light colors, seek out for the complementary color in the environment, that means blue, violet, green. It is important, that one of the complementary colors is dominating the scene and the other color is only a blot.

TIP: In train stations people are normally in a hurry, because the want to get their train. Look out, if there are people standing still, then focu on these people while taking photos with long shutter speed.

TIP: On bus stops people normally are waiting for the bus, so they are standing still. Focus on that people, while the bus arrives and then take also a photo with long shutter speed. 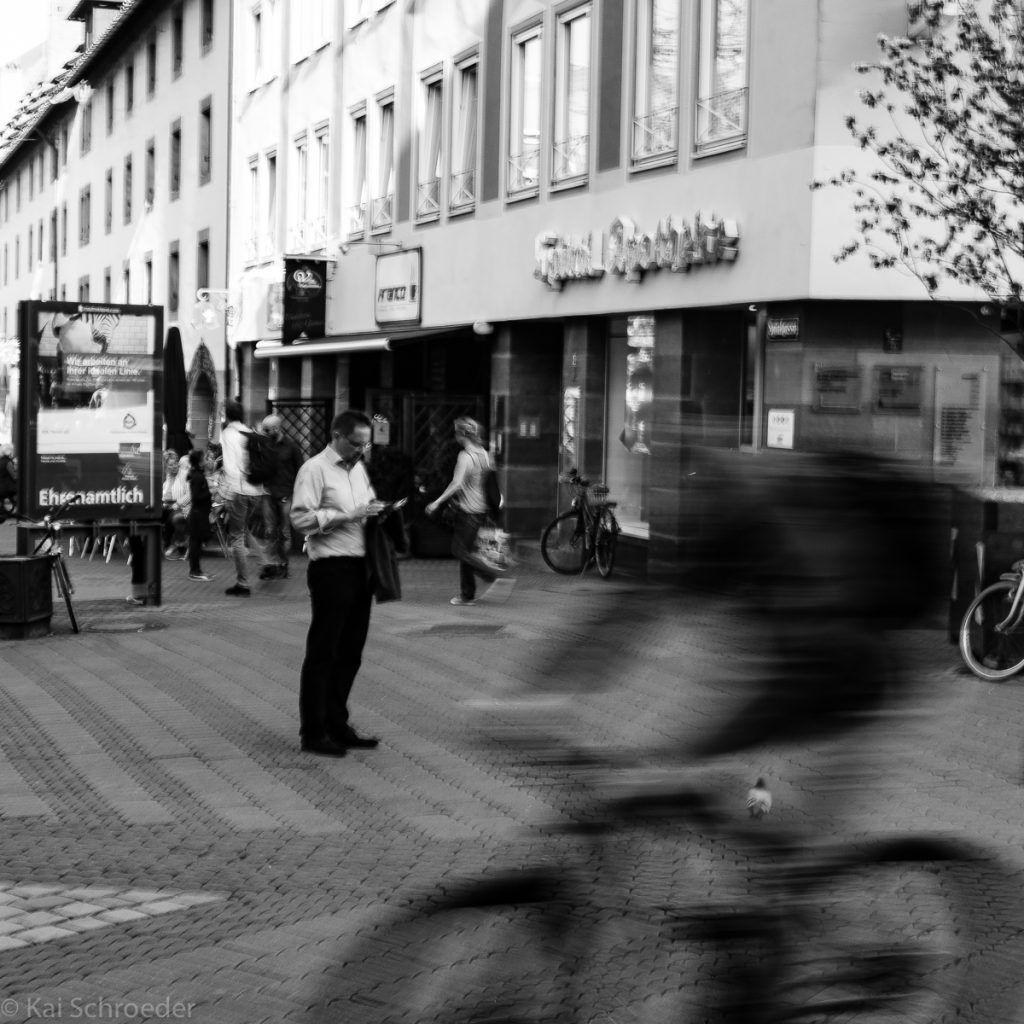 In some locations there are other kind of contrasts. That means, that you have to be creative! E.g. in bars normally people hang up together. A contrast will be a person which sits alone at a table and seems to think about something.

And sometimes there is only a contrast because of the contradiction of two motifs, like in the following picture: 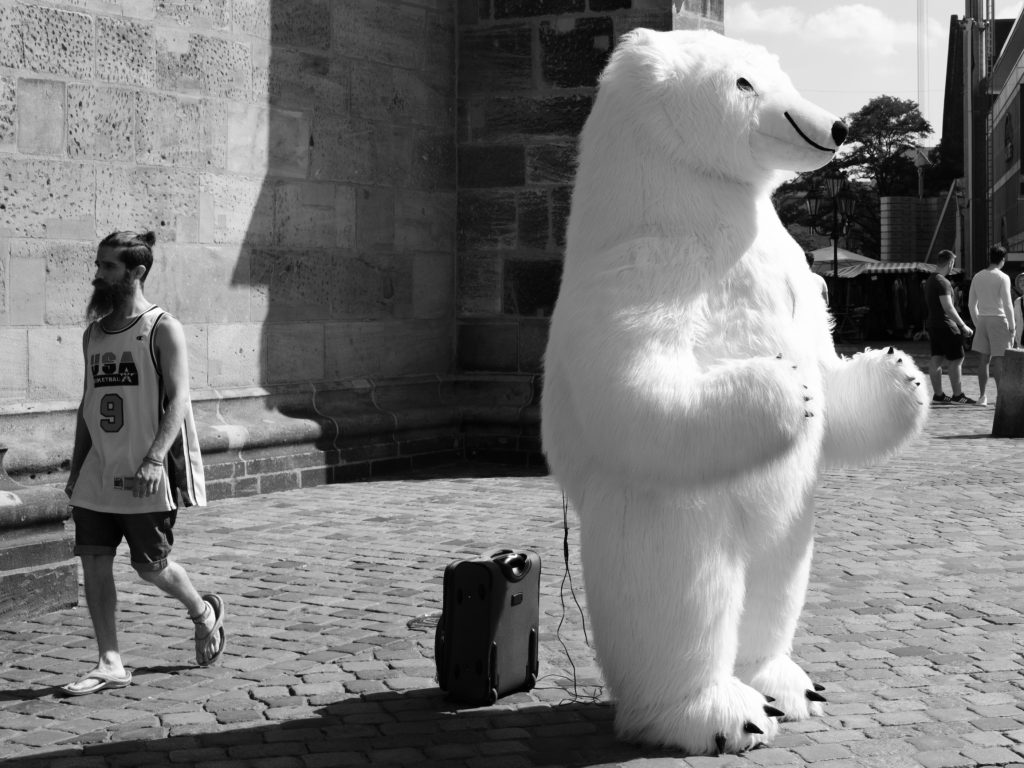 Rhythm as dynamic situation will be a contrast momentum because of the series of similar looking things or people, while the strongest visual effect will be caused by an exception at the end of the row. 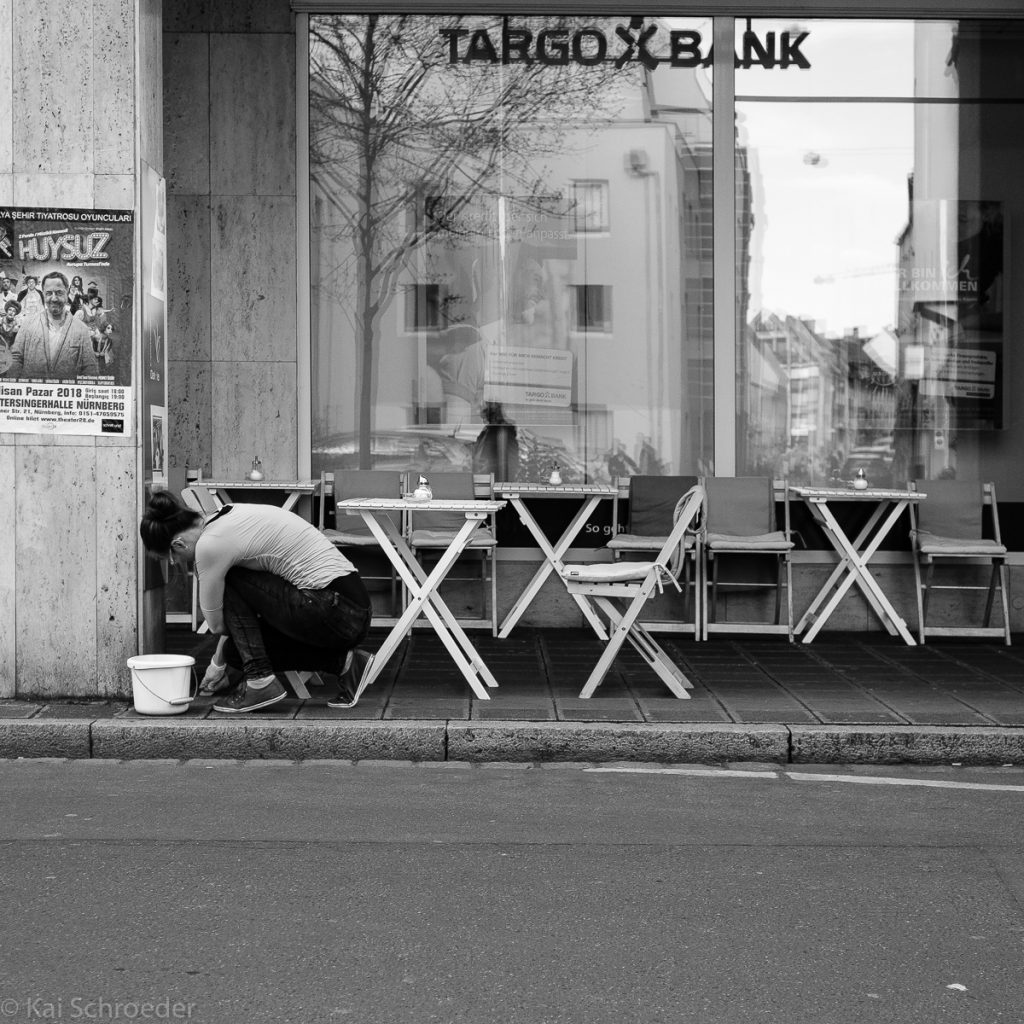 In this picture the chairs are in a row. The cleaning woman at the end is the dynamic element which breaks the row.

Important note: you should consider, that in some cultural regions the people will view on a photo from right to left. That means, that the end of the row is on the left part of the photo. It would be interesting to know, if the visual effects in the photo above would be stronger in cultural regions like the Orient.

If my humble tips have given you some ideas, I would be glad…

How do I make photos

What does Streetphotography mean to me?