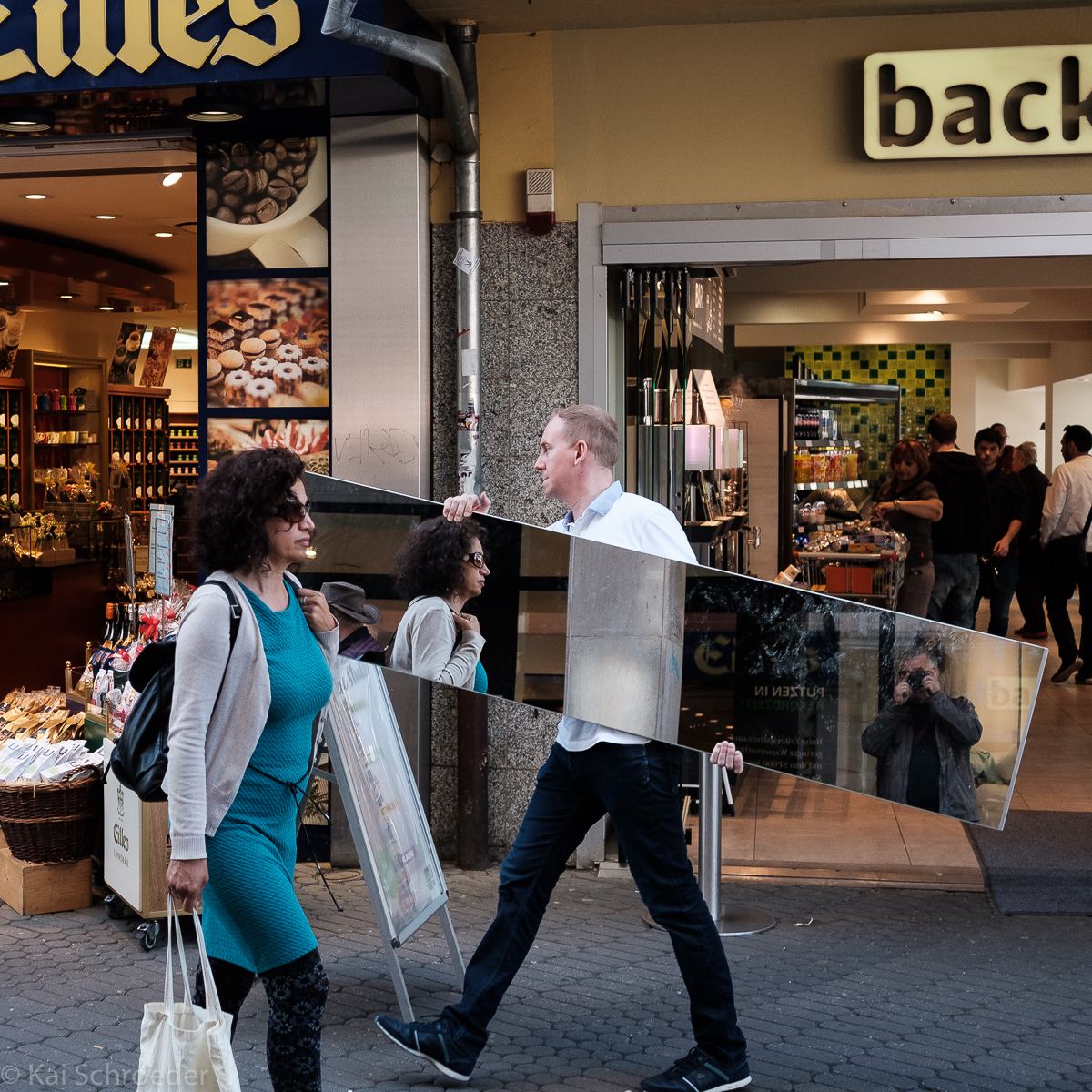 My way to Streetphotography

It all started in January 2017: I don’t know exactly when and where, but there was this article about Eric Kim. When I looked at the website of Eric Kim, my first reaction was ‘what the f*** is this?’. Before I never heard about Streetphotography, so it was a new world for me. I began to read the tutorials form him and was more and more excited.

One of Eric Kim tipps is to use a small camera with a fixed wide-angle lens for Streetphotography. Accidental I read an article about the Fuji X100F that time. And so it goes on: I ordered a X100F in a webshop, hot for Streetphotography. In fact, my wife and I we had a Nikon D90 at that time, but this camera was to big and heavy to carry around all the time.

It was a pity, that the X100F was out of stock at that time. So I waited. Then in May I  didn’t want to wait anymore and I began to consider, if the X100F will be the right camera for me. In the end I decided to buy a camera with exchangeable lenses, so I canceled my order for the X100F.

Midth of August 2017 the time had come to act: I took my wife and we drove to Fotomax (a camera shop) in Nuremberg. Actual we wanted to buy a X-T20, but when we left the shop it was the X-T2, with the kit-lens XF18-55 and the pancake lens XF27/2.8 which we bought. The pancake lens was the one meant for Streetphotography.

The first pictures were from the 14th of August in 2017. That was the hour of birth of Streetphotography for me. At this point I had around 30 Follower on Instagram and I have posted only occasional photos from some travels.

My first street photo was this: 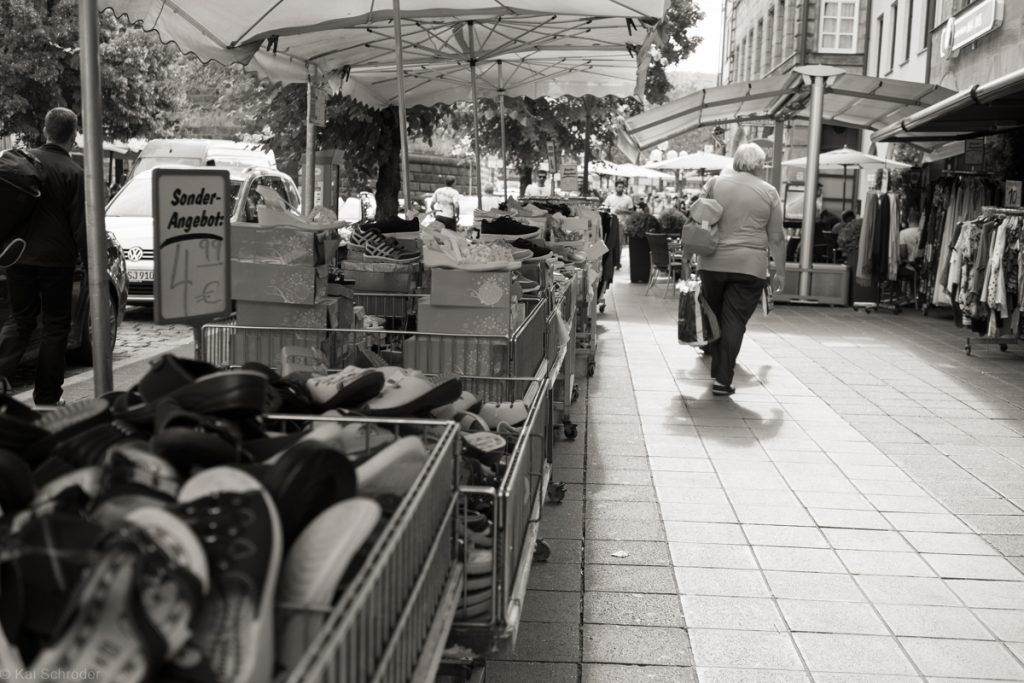 Awesome 😉 , what do you think?

At that time I was very, very cautious taking photos of people. Also I wasn’t used to the point, not to shoot to much because of the scrap rate. So I was focusing very accurate and then taking only one picture. The yield wasn’t very high.

My first street photo, which I posted on Instagram, was this one: 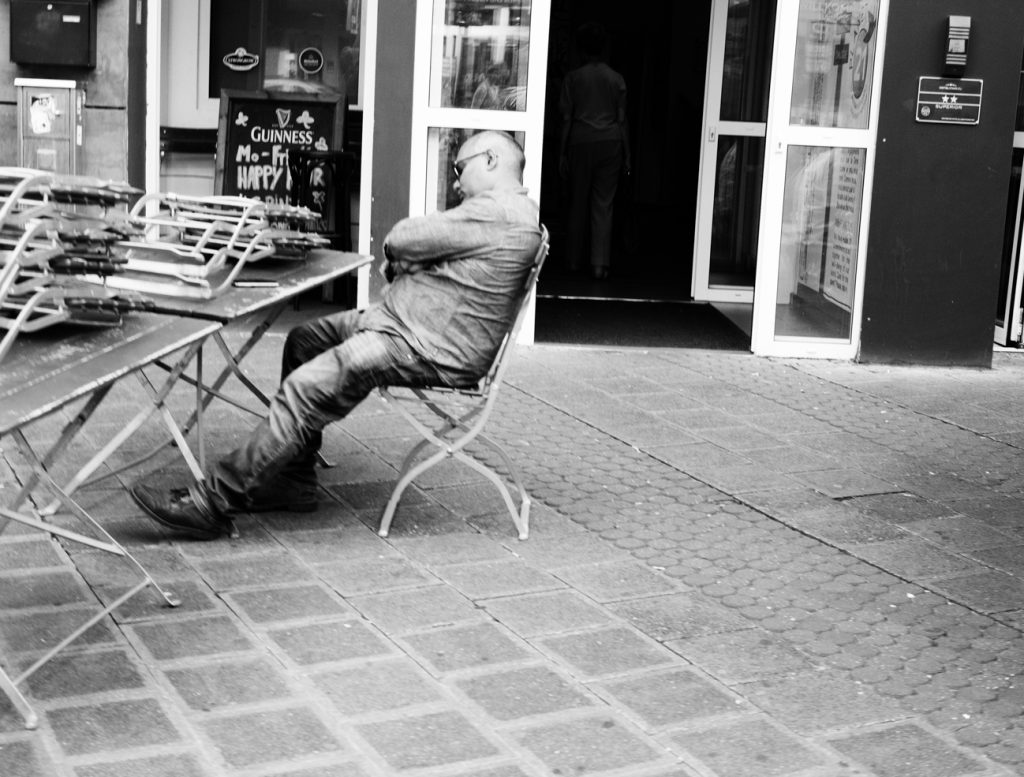 I was proud like a peacock. The feedback was modest.

In the following months I began more and more to make experiments. First I switched from single shot to continous shooting. Then I began to vary the focal points up to the point, when I switched to continous focusing. At that time I worked with fixed aperture of 6.4 and a variable shutter speed. OK, the amount of blurry pics was tremendous.

The first good street photo I’ve made (in my humble opinion) was this one: 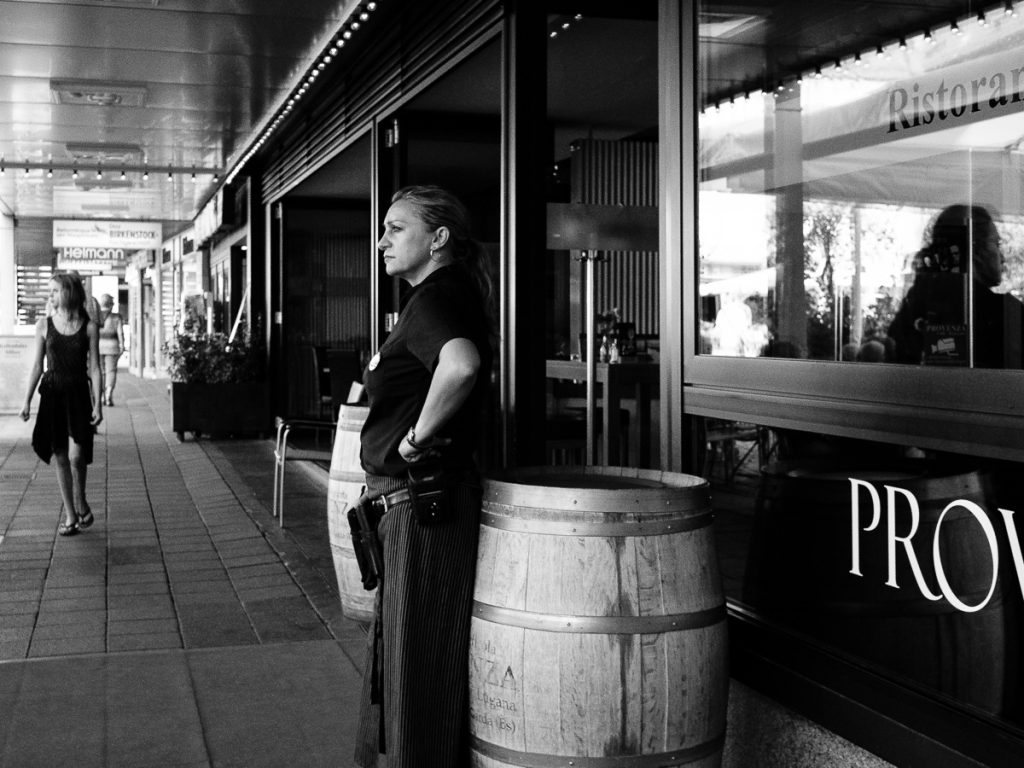 A real challenge were the winter months. I am an employee in my main job and a amateur street photographer. Unter these conditions f from November to February you will shoot in whole darkness, when you leave the enterprise at 17.00 o’clock. So I had to change my techniques in shooting: More concentration and a slow down. Just stand still and hold your hand calm. In these months my kind of looking at street scenes changed. Trent Parke had once said: “I am forever chasing light. Light turns the ordinary into the magical.”. If you ever shoot street in winter, you will know, what the sentence mean. 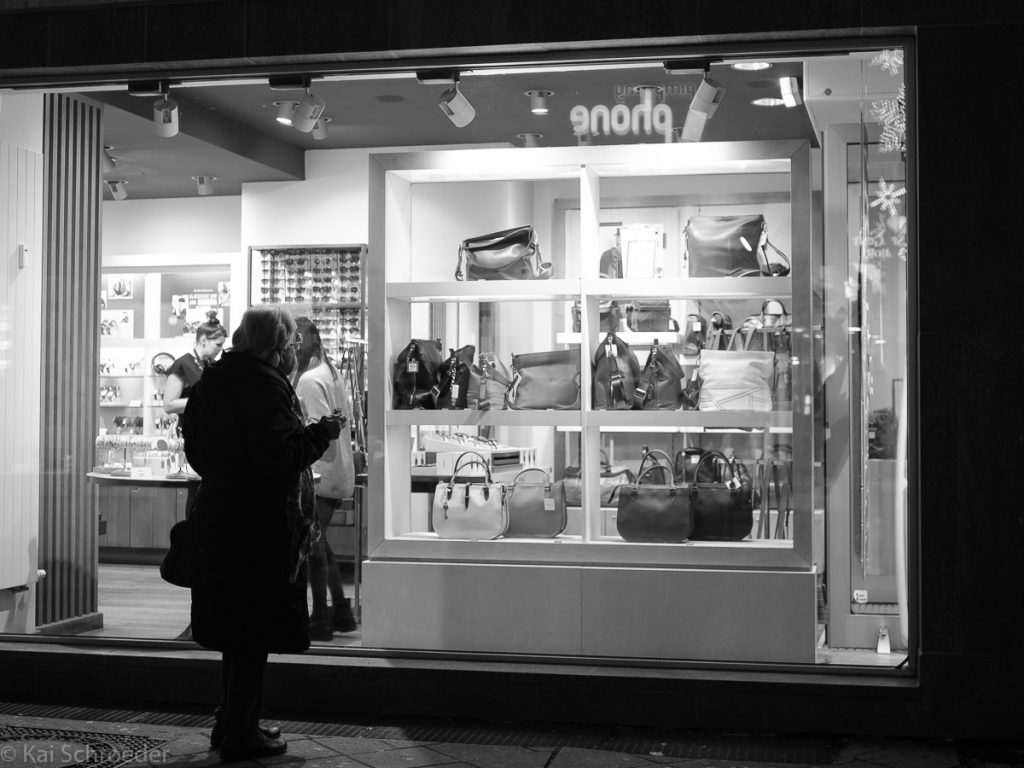 The greatest step forward I’ve made in March 2018. In this month I had a lot of practice and that consolidated my kind of street photography: The way how I hold the camera (more about that in a separate article), the way which motif I will shoot (also more in a seperate article), and the way how I work on my images in the postproduction.

At this point I should mention, that I have some ethics on making street photos: No childs, no helpless people and no people with disabilities – these persons are taboo. And I should mention, that I have a very less postproduction. There are only three things I will change in postproduction: Acros or Classicchrome, increasing contrasts and cropping – that’s all. I don’t do photoshopping! That would mean for me to change the history, it would not feel authentic. So all of my pics are pure and raw street!

When I write this article the count of followers on Instagram is nearly 1200. I’ve made so far around 15000 pics. Serious post produced were around 1000. Actually I’m looking for other street photographers in Nuremberg, to exchange views around Streetphotography. I’m curious which interesting people I will meet.

Meanwhile I have a X-E3 as second body and 4 more lenses. The X-E3 is my main workmate for all days.

My actually best photo (imho) is this: 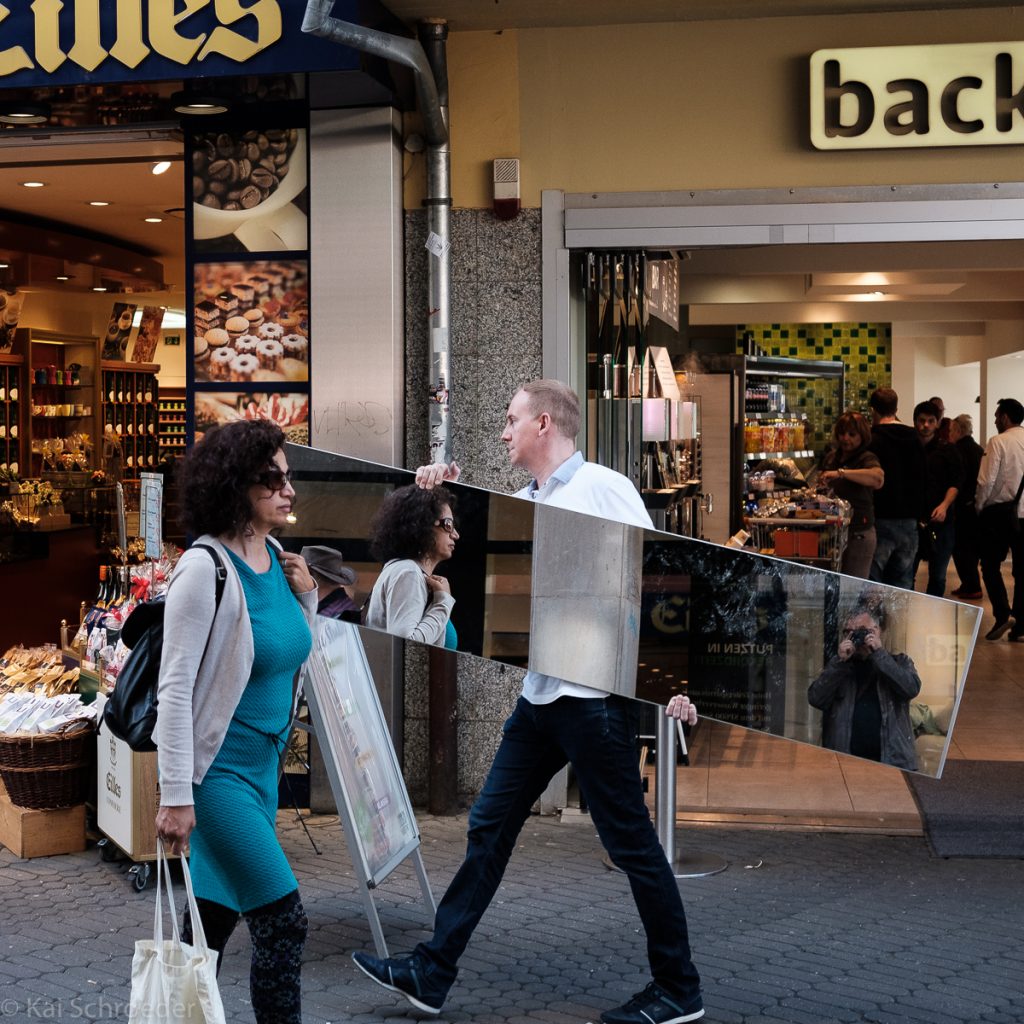 How do I make photos

How do I get good street photos?